New Currents in Contemporary Ceramics at the 2014 Taiwan Ceramics Biennale

The 2014 Taiwan Ceramics Biennale (TCB) is sure to establish Yingge Ceramics Museum in New Taipei City, Taiwan, as one of the institutions at the forefront of contemporary ceramics. The title of the 2014 TCB is Terra Nova: Critical Currents /Contemporary Ceramics and we mark the beginning of the biennale with an opening party on 2 May.

The exhibition open to the public for five months, from the 2nd of May to 12th of October. The 2014 TCBConference, which has become an integral part of the biennale, and a series of master classes and workshops take place in Yingge Ceramics Museum on the 3rd and 4th of May.

The format of the Taiwan Ceramics Biennale alternates between exhibitions of works selected directly by an international jury and shows arranged by a specially selected curator. The first time Yingge Ceramics Museum offered a curator of international repute to select the biennial exhibition was back in 2010. This year, the exhibition is curated by the esteemed Wendy Gers of South Africa.

Wendy Gers is a lecturer at the Ecole Superieure d’Art et Design de Valenciennes, France, as well as research associate at the University of Johannesburg, South Africa. As the curator of the 2014 TCB, Wendy Gers carefully selected the works of this exhibition and arranged them according to four main themes:

Like previous years, the TCB 2014 follows by an international symposium and two days of workshop activities including
presentations by international artists, designers, and makers. The event brings together prominent writers, academic scholars and curators and artists to debate or demonstrate issues pertinent to creative ceramics. The event is yet another fine addition to the rich
tapestry of TBC 2014.

The work that I created for the biennial TBC 2014, “Ev.14.0” (Evolution 14.0) is an example of domestic art (home automation art). In the first phase, in order to create the core of the porcelain, I inserted copper wires within 30 panels of porcelain about 1 mm thick. In subsequent phases, the panels were fired three times at high temperature to make the piece hard and strong, yet translucent and alive. The whole process took less than 4 months’ time. Each panel measures approximately 45 cm x 45 cm x 1 mm thick and weighs 1.65 kg. RGB LED lighting was applied behind the panel using both software and hardware systems created by “ELES Semiconductor Equipment SpA” of Todi, Italy.
Boccini’s interactive tile panels are part of an ongoing experimental research with engineers and other partners. His work combines fine porcelain tiles with minerals, metal, sulphates and other elements. The high firing of the porcelain vitrifies the elements. The various panels emit coloured light which is responsive to different voices (young vs. old; male vs. female) and touch. The artist noted, “My idea is to create a ‘feeling’ between art and people with multi-media work. I’d like to develop the possibility of new conception of contemporary ceramics and try to create a new form of ceramic expression. 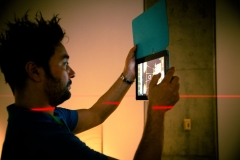 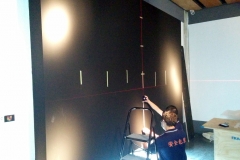 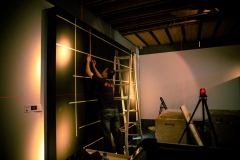 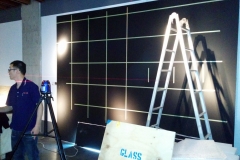 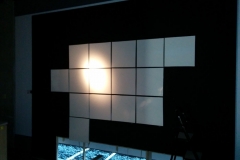 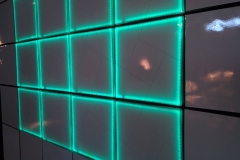 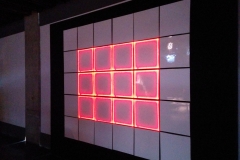 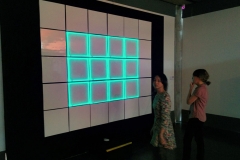